The Island of Rab

Because of its location at the foot of Velebit mountain range, particularly Kamenjak mountain, the island of Rab is protected from cold and stormy winds. Appearance wise the barren mountain of Kamenjak and Velebit channel appear ominous, but the mountains are a blessing to the island, protecting it from cold and stormy Winter winds, providing for a pleasant local climate. Thanks to its luscious vegetation, its sunny and proliferated coastline, deep blue and crystal clear sea water, irresistible natural beauty and thousand year old culture, Rab Island has always offered something special to its visitors. This is why as far back as 1889 the city fathers declared Rab Island as a tourist and health resort. By the beginning of the 20th century Rab had an increasing number of visitors, tourism was developing rapidly, and the number of those that fell in love with Rab seeking rest and recreation grew. Tourism flowered between the two World Wars, when in 1936 Rab was visited by King Edward VIII and his wife. The English couple were probably the most distinguished nudists to visit Rab that year. Nudism on the island commenced with the opening of the first public nudist beach only two years earlier. The cultural and historic heritage of Rab was discovered by many acclaimed historians relatively early on. The first Croatian cultural historian, Ivan Kukuljevic Sakcinski, described the City of Rab in 1856 as historically rich, and expressed his wish to visit the island again. The English architect T. G. Jackson stated in 1887 that which many have said before and after him: “a strange medieval town, closer to reminiscence than reality...to my tastes the most beautiful of Dalmatian towns”.

Medieval Rab in its entirety is probably even more inspiring than any of the many individual monuments with which the town is adorned. Numerous gothic and renaissance palaces of distinguished gentry, monuments to sacred and secular life of times gone by, all lead to the creation of a uniqueness that is Rab. The combination of old buildings, a range of precious portals, richly decorated balconies, beautiful windows and signage from various historic periods creates a unique atmosphere, a sense of perfection and peculiar picturesqueness which will leave every visitor standing in awe. Rab is the most northern of Croatian islands to be covered in Mediterranean vegetation. Professor Günter from Graz wrote in 1912 “For its many visitors Rab can be primarily thankful to its rich vegetation, particularly Komcar Park, the work of Forest and Parks Commissioner Belija in 1883, to whom inhabitants will one day surely raise a monument. The visitor returns from the island refreshed by sea breezes and will remember his visit to this beautiful island for a long time to come”. And truly the inhabitants of Rab are proud of their luscious vegetation, of its century old Komrcar Park with all of its pine trees, agavas...and of their Commissioner to whom they raised a monument as was prophesied a long time ago. Park Komrcar aside, the South-western side of the island is rich with a variety of vegetation: pine trees, palm trees, olive groves, green pastures, vineyards... It seems that the island was named after its forests. Ancient names such as Arva, Arbia or Arbitna, in Italian Arbe or Croatian Rab, originate from the Illyrian Arb, meaning dark, green and forested. One of the most beautiful and most forested areas of the Island is Suha Punta (Dry Point) and rt Kalifront (Kalifront Peninsula). Located opposite is the North-eastern part of Rab Island, orientated towards the mainland and Velebit mountain range, a karst, arid and harsh landscape similar to the surface of the moon.

Temperature
Rab is an island of the Sun, and you can surely believe that these are not just empty phrases: Winter on the island is pleasantly moderate while the Summer is hot with an average of 2,600 sunny hours per year, in other words, more than 10 hours of sunshine per day during the Summer months. The average temperature during the Summer months is a pleasant 26°C, while the Winter minimum rarely falls below 10°C. Truly a sunny paradise during all seasons of the year.

Greatest width of the Island: 11 km

Sea temperature from May to october: above 20°C 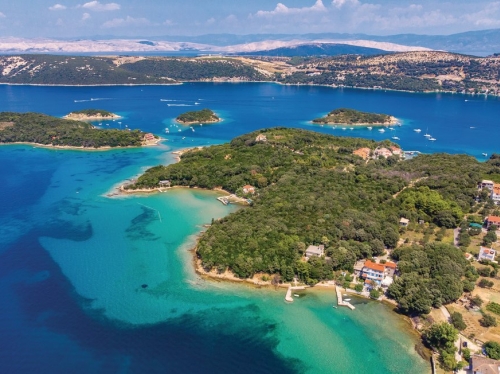 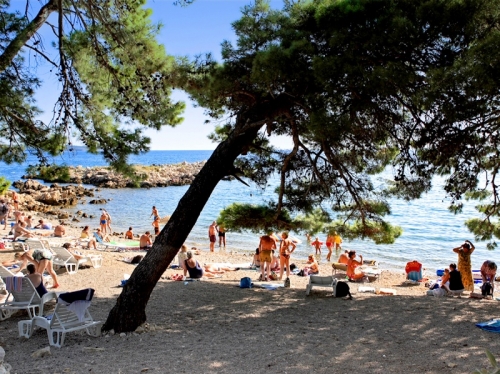 These websites use cookies to provide you with a better user experience and functionality. You can adjust the cookie settings in your web browser. Read more about cookies and how we use them and how to disable them here. By clicking 'OK', you agree to the use of cookies.